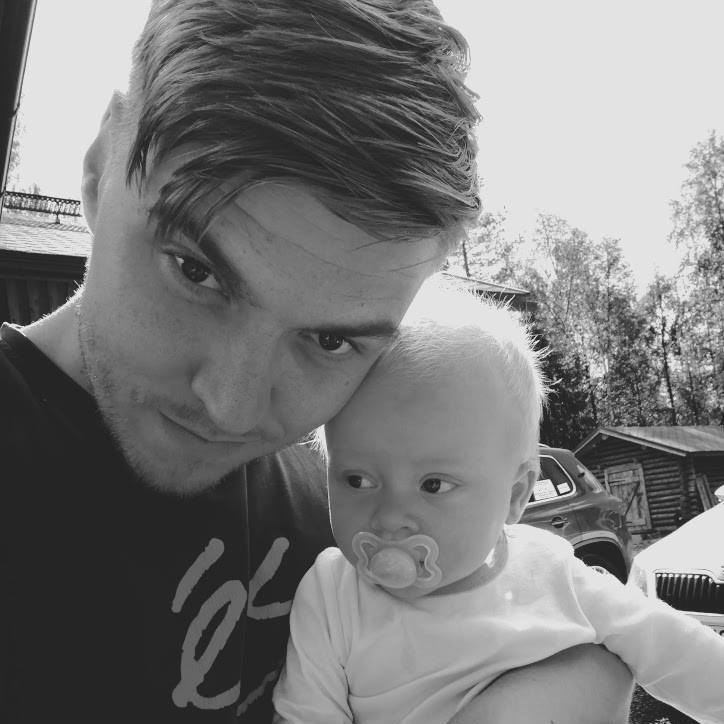 Me, in a nutshell

I am 33 years old father, husband and Lead Developer at OP Financial Group from Kempele, Finland. I live with my wife Eeva, two boys (Eemi & Osmo) and two dogs (Ohmi and Voltti).

I am technology enthusiast trying to keep up with the latest things around. As a programmer I love everything from low level assembly coding to web interface design.

I also like PC games, football, climbing and running from time to time. Additionally I have found an interest in brewing beer at home. We have a "brewing company" with two of my friends called Kemble Brewing Company. Please check out our Instagram and Facebook page for latest updates!

I was born in 8.11.1986 in Oulu, Finland. That makes me 33 years (exactly 12370 days) old. I have one brother and one sister both younger than me. In the early ages we used to move a lot around Finland but finally landed to Haukipudas where I went to school and after all graduated from Haukipudas High School in 2005.

After High School I started my military service and I served for one year as EOD operator in FRDF (Finnish Rapid Deployment Force). After the army I went to Oulu University of Applied Sciences to study computer science. In 2008 I went to Valencia, Spain for Erasmus exchange and I spent one year there.

During my studies I was doing internship in many companies such as IT-Salonen, Nokia, Belleviews and Maxtech. I also was board member in student organization Ote Ry where I was responsible of communications (advertisements, website, etc.). In spring 2010 I got contract to work at Nokia and joined just awesome S40 Graphics team where I was previously as a trainee in 2008.

During studies I also met my wife, Eeva, and we started dating in 2009. We moved together next to my workplace in Peltola with Eeva's dog Mina. In late 2011 I was promoted to Senior Software Developer at Nokia. I also changed my position in 2012 to work in Continous Integration team. We moved to Kempele in 2010 with my wife, dog and cat.

Just before Microsoft bought Nokia I left the company in early 2014 to take place as Lead Software Developer at Maxtech where I had also been as trainee previously. My main focus was to develop Maxtech ERP product as well as lead the development team. In 2014 we got married and in November 2015 our first son, Eemi, was born.

In June 2017 I changed to work at Elektrobit Automotive Finland where I was developing Adaptive AUTOSAR and also participated in the consortium specifying it. In the last months in the company I was taking more responsibilities over the architecture of the software product.

In 2020 I needed some new challenges to my life and I started working as a Lead Developer in OP Financial Group.

I like to do all kinds of sports. In the summer time I mostly play football in Kempele with a hobby group. I also go to the gym and do some running and climbing once in a while. Additionally I like to work out in our garage.

Travelling has always been one of my favorite things to do and my wife loves it too. We have been almost in every part of the world though there is still lots of places to visit. I am hoping we can start travelling more again once our sons are a bit older :)

PC gaming is also one of my interests. Mostly I like to play FPS games like Battlefield and COD and role-playing games like Witcher and Fallout. I have been playing since I was little boy and I think I will do it until my hair doesn't grow anymore. Feel free to join our gaming Discord

During spring of 2019 I found an interest in brewing beer at home. We have a "brewing company" with two of my friends called Kemble Brewing Company. Please check out our Instagram and Facebook page for latest updates!

I have also participated in voluntary military trainings at Pioneerijotos when it has been possible.

I am interested in all technology, especially in programming, related stuff. I like to follow Hacker news on daily basis for all new and interesting things. Also I have grown interest in cryptocurrencies like Bitcoin.

I also keep a blog at medium.com mostly concentrating on technology but also writing about some other things like brewing.

Additionally I read quite a lot of books mostly related to some technology, programming language or software construction in general.

drodil nickname is old and the background of that name comes from role-playing game called Stormcoast we used to play with my friends during high school times. I use this nickname in internet services and IRC.

DK|Deathammer is my other nickname I mostly use in games etc. The nickname came from our airsoft team Deathkult (DK or KVLT).

This section summarizes my work and education over the years. Click each section open for more information!

Working as Product Software Architect responsible of the overall architecture of the Adaptive AUTOSAR product. Additionally improving the architecture design process and guiding teams in following the design guidelines and following the processes (including organizing trainings). Partly supporting in implementation of the Adaptive AUTOSAR REST module.

Good friend of mine and great tattoo artist from Oulu, Finland

Application for all beer brewers around the world

You can contact me via e-mail, phone or any social media channel